Hotel Barriere Le Westminster perfect captures the history and spirit of Le Touquet and its journey to becoming one of the most popular golf destinations in France. The hotel is equal parts elegance and luxury, ensuring guests enjoy a first-class experience from the moment they arrive.

Found in the heart of Le Touquet, you couldn’t ask for a better location, with the town centre, beach and casino all within walking distance. More importantly, The Westminster Hotel is within easy reach of some of the best golf courses in France, including the magnificent Le Touquet Golf, which is just 5 minutes down the road.

Opened in 1924, the hotel was named after the Duchess of Westminster, and was a meeting place of the great and the good of Paris, Northern France and even Britain in its early days. None of the glamour has been lost today, as the Westminster is still one of the most desirable hotels in Le Touquet.

Refurbished in 2020, the 104 bedrooms are beautifully appointed and are designed by the French architect Bruno Borrione to marry the principles of traditional Art Deco style and modern functionality. Striking pieces of period furniture are dotted throughout the hotel.

This special hotel is a classy central option for a golf holiday, where you will enjoy the grandeur that first put Le Touquet on the map.

Hotel Westminster has its own swimming pool, while the nearby beach is the place to try a wide range of water and adventure sports. The Spa in partnership with the cosmetic brand Nuxe proposes 6 refurbished massage cabins, a hammam, a sauna and a new fitness centre.

The meeting point for Tony Blair and Jacques Chirac during the Franco-British summit, Hotel Westminster has welcomed some famous names in its illustrious history; notable visitors include the Prince of Wales in the early days, while subsequently Marlene Dietrich, Winston Churchill, Sean Connery have stopped by. The Westminster has a British style bar, while Le Pavillon, the gastronomic restaurant 1* at the Michelin Guide and La Table du West offer superb a la carte menus. 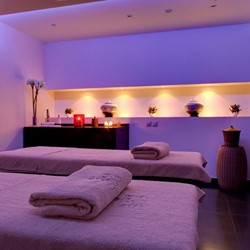