Aroeira Lisbon Hotel - Sea & Golf Resort has a restaurant, outdoor swimming pool and a bar in Herdade da Aroeira, near the Golf course. Among the facilities at this property are a 24-hour front desk and room service, along with free WiFi throughout the property. The hotel features family rooms.

At the hotel, rooms are equipped with a desk, a flat-screen TV and a private bathroom. All rooms at Aroeira Lisbon Hotel - Sea & Golf Resort have air conditioning and a wardrobe.

Continental and buffet breakfast options are available each morning at the accommodation.

Aroeira 1 is located to the south of the capital and is between Lisbon and Setubal. It is easy to reach by car due to the motorway going south and head west to Costa da Caparica. Aroeira 1 is considered by Portuguese golf society as being one of the courses on which 'to be seen playing'. As one of the better courses in Portugal, the Aroeira 1 golf course has hosted the Portugal Open in 1996 and 1997, and also the Ladies Open and the Qualifying School of the Ladies European Tour. The fairways either run through pine trees or open ground.

From the tee the first hole of 485 metes and a Par 5 demands a shot to carry a lake. Two holes that are worth a special mention on Aroeira 1 are the eleventh and the fourteenth.

The Aroeira 2 Golf Course is the sister to the Aroeira 1 Course. It is easy to reach by car due to the motorway going south and head west to Costa da Caparica. The architectural design of Aroeira 2 has a different game for the golfer to play with large fast greens. Due to the flat nature of the terrain, the fairways tend to be challenging by strategically placed bunkers, some of which are of a typical Scottish pot character. Water hazards are not forgotten with five attractive lakes. Golfers have a choice on each hole of five tee levels which will depend on their ability. The location of the Aroeira 2 golf course has also been developed by the owners into an attractive family style leisure centre. 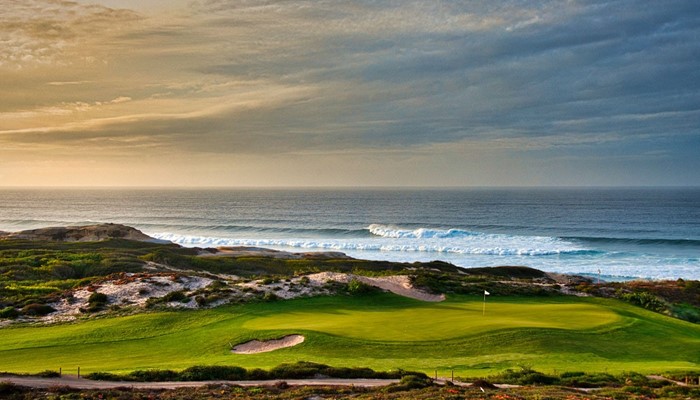